In 2022 the Calgary Philatelic Society will be 100 Years old since it was founded and will host the annual BNAPS convention (BNAPEX) over the Labor Day weekend from 2 - 4 September. CALTAPEX, which is normally held the third weekend of October, will be combined with and held at the same time as BNAPEX with the show named CPS 2022 BNAPEX (CPS being Calgary Philatelic Society). This show will not be exclusively BNA, as it has also acquired the rights to hold a National level exhibition concurrent with this show so finetune your worldwide exhibits too. As a consequence, there will not be a separate CALTAPEX show in October. With the addition of National judging for the show, additional exhibitors and attendees are expected to come and help make our 100th Anniversary a great party.

A committee was formed in 2020 to plan for BNAPEX 2022 and members have been assigned tasks which will begin much of the detailed work in the Fall of 2021. The venue - Hyatt Regency in downtown Calgary has been secured under similar terms to 2017. Please watch for further announcements from your committee.

All the information for CPS 2022 BNAPEX will be found on the BNAPS website starting in January 2022. Click here to go to the webpage. 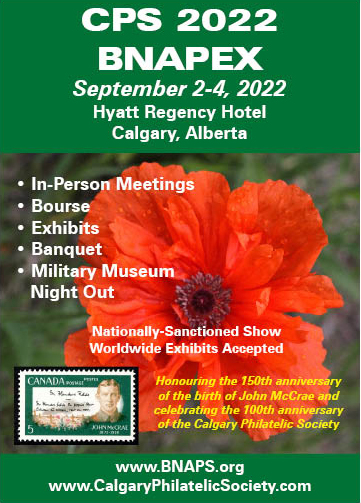